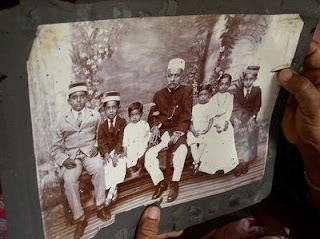 When I was thinking about the kinds of comments I could make regarding Andrés’ work and especially regarding the work that Paul Firbas and I did on this book, what first came to my mind was a reference which is not my own. I actually thought about a fascinating passage of Borges. Then I realized how strange it was that in order to begin to talk about Andrés Di Tella I felt that I needed a very Argentinian reference. But this Argentinian reference happened to lead me from Buenos Aires to, of all places, India, which is exactly the misty, or murky space, of most of Andrés’ last movie, Fotografías.
In his 1952 postscript to his most famous book El Aleph, Borges tells us about the new stories he had just added to the book, giving us some hints (which in Borges are always misleading, of course) on the origin of such stories. In regard to the short story entitled “El hombre en el umbral”, Borges says that “la situé en la India para que su inversosimilitud fuera tolerable.”
My few observations have to do mainly with this word: tolerable. First of all, it suggests that there is something intolerable, something that cannot be said, if we are still in Buenos Aires. Or something that can be said – understood, and accepted – only if we leave the place where the discourse has been generated. Contemporary academic common sense is always very happy with such displacements, and so am I. But there is something very interesting beyond the loss of references and the geographical dislocation, which is (I think) the epistemological status of a discourse on the subject.
To be more specific, when Paul and I began to edit the interview with Andrés Di Tella, which is the core of this book, we realized that we were basically talking about a non-existent object, which was a movie that nobody had really seen. But then we began to perceive (or maybe we were just imagining something, which is just another way of saying that we were trying to create a verisimilar object) – we finally realized that the non-existent object was the subject itself.
In order to avoid entering a sort of boring game of words, I just would like to point out that what we were doing (or maybe what we wanted to do when Paul, Fernando Acosta, Jussara Quadros and I interviewed Andrés) was to understand the displacement of the subject. “Inesperado cambio,” according to Arcadio Díaz-Quiñones’ provocative words, was something that Andrés’ new movie (an unfinished movie then) wanted to express.
What kind of inesperado cambio, or unexpected change? In what kind of flow does Andrés’ work find its very unstable nature? Of course, we were talking about the crisis of the subject, about the crisis of representation, and we all know that this is the typical scenario for modern art and maybe for contemporary art as well, but we were also talking about something very specific, very local, very personal. We were talking about a genre, which cannot find its status either in the realm of fiction or outside it. Finally, we were talking about a person who wanted to tell us the story of a country, and ended up thinking that he needed to tell us the story of his family. And then he realized that even telling us the story of his family was impossible. And maybe this is the most productive and most disturbing effect of Andrés’ forthcoming movie: the subject has just been lost.
We all know here that the story of a family and the story of a country are exactly the main sources for the major narratives that formed our tastes and our conception of literature. And if the time of great narratives has really passed, we need to deal with such loss. And mourning, grieving, is the most efficient way of dealing with the intolerable, that is, with loss itself. When someone like Andrés Di Tella writes (and Andrés is a very good writer), he may very well be mourning the death of those traditional unities of meaning: family, nation, society, and even community.
Andrés’ last documentary is indeed a deep and touching attempt at grieving. It begins with a scene in a cemetery, where his father confesses that he had ordered that his dead relatives, even Andrés’ mother, be incinerated. That’s the starting point for the subject to launch a quest which is almost intolerable, as you will see once you have the opportunity of watching Fotografías. This brings us back to my initial remark on Borges.
It seems that it’s always better for the subject to place his quest in another territory. What he will find (if he will find something), after all, cannot be accepted, or understood, in its own place. To think playfully about the provocative (and already discussed) title of this year’s Festival, “I was there”, I would say that it is the statement of a paradox. Through Andrés’ work, and through his dialogue with contemporary literature and cinema, we may learn that “there” is often a vanishing point, since the subject itself (or himself) has finally lost its place. The retrieving of this place is the impossibility that makes Andrés’ work so touching, and so mysteriously balanced, composed as it is, of sadness and joy. And a composition of sadness and joy is basically mourning. It’s grieving.
That’s what I hope the book can help us understand, through the voice of the documentary filmmaker. That is, I think, one of the main points of our discussion in this book, and the one that interests me the most: the subject is not only mourning for his losses. He’s mourning the loss of himself.
Andrés Di Tella Arcadio Díaz-Quiñones Jussara Quadros Paul Firbas
Share: